The First murder was of Alexander Eliot and discovered by residents in a secret room above the Loki Absinthe Cafe and Distillery. Letters found on the floor giving clues to a mysterious plot.

“It seems Alexander Eliot was working on some great and dangerous invention. He was performing experiments on the Sunrise Island, and probably discovered forces such strong that failure of the last experiment has blown up the whole island and left only circle of atolls around the crater.
After this catastrophe Alexander Eliot apparently stopped the experiments and destroyed his invention. Well, not really destroyed, he divided it into three parts, one he gave to his grandson Loki, the other to some urchin named Ally Wunder with instructions to pass it to some contact in Caledon. The last part he hid somewhere… There was also a note about someone called Jason, probably his assistant, who begun some experiments of his own – Prof. Elliot disagreed with his behaviour. And the mysterious Van Greed Society, which he seemed to be scared of.” from Natacha Chernov‘s investigations.

Residents of New Babbage searched for the three parts of the secret Device but found nothing. Then a second Murder brought with it new clues. Mr. Giles Canning the second victim was Alexander Eliot’s new assistant and helped during the Sunrise Experiment. Along with a letter, Giles was found with a Cylinder recording of the final moments of The Sunrise Experiment. The Recording told how a group of scientist lead by Alexander Eliot tried to puncture a hole through to another world with a device called the Porta Terrarum, but ultimately failed blowing up the Island.

A letter found on Giles canning from a group calling themselves The Thirteen requested Mr Canning destroy any evidence that would lead people to the Thirteen. The Murder seemed to have halted his mission.

“The Thirteen” wanted Mr. Canning to get rid of any evidence that could prove his connection with The Sunrise Experiment, and since the phonograph cylinder was found near the body, I presume he was trying to do so. But he was too late…” from Natacha Chernov’s investigations.

”’Terror in the Streets of New Babbage.”’

Rumours started to spread about a mad man killing residents. People also started to scream werewolf as dark shadows in the night ignited panic in the streets. The police at this point had pinned the murders on a Jason Moriarty who it was believed was the first assistant to Alexanders experiments

According to one of Alexanders last letters, the Porta Terrarum device had been split into three parts. One he gave to his Grandson Loki Eliot, the other to an urchin called Ally Wunder and the third is hidden. Although Loki repeatedly told investigators that he had never seen his grandfather and that he was unaware his grandfather was hiding above the Absinthe Cafe so does not have any part of a device. Ally Wunder was actually called Victor Wunderlich and went missing pressumably in hiding.

News spread that the device in its entirety had been discovered. The Bow Street Police took control and closed off the building and announced they had indeed found the Porta Terrarum Device. But some residents were sceptical as parts did not match drawings found at Sunrise Island.

“It looked almost exactly like on Prof. Elliots drawing… except the small part named there as “Babbage Mark 6”. Although it’s not very clear from the picture, it looks different. And whole device seemed to be too polished, too… new.” from Natacha Chernov’s investigations.

it was later proven to be a fake and the search was back on.

”’Finding at the Absinthe Cafe”’

During a grand opening of a gallery at Loki Absinthe Cafe, residents were shocked to discover a painting by Jason Moriarty placed on the wall. 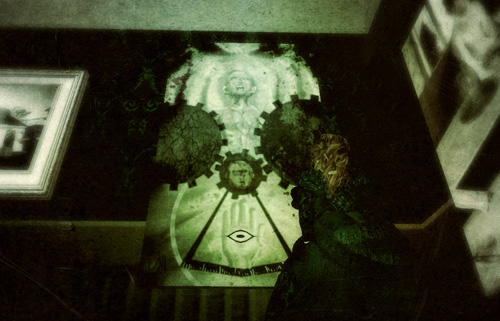 “I was wondering if anybody else has noticed it’s actually painting of Prof Eliot’s device, only as a part of some bigger machinery, and with human face in place of “Babbage mark 6” part. And finally, Miss Li discovered another note, on the back of the canvas, a letter from prof Elliot to Jason! He reasons him, kindly, to stop his experiments, and his letter is so warm-hearted that Loki pointed out Prof. Eliot probably cared more for this Jason than for his own grandson… I felt sorry for the boy…” from Natacha Chernov’s investigations.

Edler Reifsnider who later turned out to be a member of the Freemasons tried to get the Imperial Theatre Demolished. The residents argued against his claims to owning the theatre through Alexanders unpaid debts. Needless to say he was later found swinging from rafters. His death could have been from anyone as everyone seemed to despise the man, but of course it was pinned on Jason Moriarty. Yet there were those who believed Reifsnider’s business was definitely connected to the Eliot Device.

Loki heard Reifsnider shouting at Prof. Nishi “when it happens, and by god it will happen, no one can stop it”

After months of looking and glimpses of Jason Moriarty he finally made his first Mistake. Victor Wunderlich had come out of hiding and at the first opportunity Moriarty grabbed Victor and carried him off while also cutting Loki Eliot’s arm. Miss Nishi and her team managed to trace them to the MaYifu Arcade where upon inspection a hidden wall was found leading to a secret lair.

“On the walls there hanged photographs of children, together with disturbing drawing of a monster not unlike some giant octopus…” from Natacha Chernov’s investigations.

In the back of the room also the diary of Jason Moriarty was found. He was a street child back then when he was helping Prof Eliot with his experiments, and almost like son to the old man. They were exploring some “Blood Mechanicals theory”, suggesting that manipulating with certain elements of human blood can drastically improve human abilities… and in Moriarty’s case they were improved for sure, turning him into werewolf. He used orphans for his experiments, experiments with his own, smaller version of Eliot’s device. And it’s possible those experiments were killing them. Jason had been trying to expose the 13 Club and Alexanders experiment. His hope was that the chaos from the exposure would leave New Babbage vulnerable to the coming of the old ones. 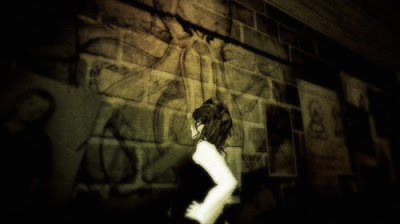 The final act in this tale occurred after a town hall meeting. The residents of New Babbage were leaving the Hall when all of a sudden there was a large flash and boom as a beam of light shone into the sky above the old Imperial Theatre. Later people would be told what happend.

Victor Wunderlich (ally wunder) was indeed given a piece of the Porta Terrarum Device to hand to Mr canning, but before he had a chance he saw Jason Moriarty kill the man. He later gave the part to another urchin called McKay Beck. McKay and Myrtil saw no choice but to exchange the piece for Victors life.

Jason Moriarty had also somehow found the second part of the Porta Terrarum and put the two together before opening a secret underground hatch in the floor of the old Imperial Theatre. It was alos later revealed that he had in his possession the third part of the device. According to investigators, Loki did not have the third part, but actually WAS the third part. The boys blood activated the machine. The machine was the Imperial theatre.

The strange cogs and wheels that seemed to confuse residents about the theatre started to turn. The projector and screen turned out to have a second purpose and a beam of light was propelled into the sky. Soon there was a large vortex growing and from it emerged a large tentacled beast. Airships whirled around it to get a closer look, then it roared a most monstrous sound.

What happened Next has never truly been understood as the only witness, Nareth Nishi, has never told the public. The crowd that had gathered outside the Imperial Theatre say they heard a huge explosion from inside the theatre and smoke started to plume from its windows. Then the beam vanished and the monster in the sky seemed to scream before vanishing in a great flash of light. Jason Moriarty was thought to have been killed in the explosion, but his body was never found. Nareth Nishi survived but was changed dramatically by the experience. The device was left broken beyond recovery, and still can be seen in the underground of the theater.

The Porta Terrarum device is exhibited now in the theater as some attraction for visitors, calm and harmless. But some questions still remains unanswered. There are remaining members of “The Thirteen” club of scientists, and there is of course Van Creed. Several days after the horror above Babbage was defeated, Bow Street police received the footage of the vortex, together with note: “To The Mayor of New Babbage – Best Regards from the Van Creed Society”. from Natacha Chernov’s investigations.

For more on the unfolding story, visit Natacha Chernov’s pages