…Concerning the Tenk family, who have have worked as clockwinders in the city. Our extensive intelligence resources have been unable to find out where the family resided, only where Tenk himself is known to sleep during the afternoons. He has been examined, and despite his unusual appearance and diminutive stature, appears to be quite ordinary. A group of brothers found him working at the forge before matins and quickly gathered items of various metals so that we would set tasks for him. He worked on each item, both hot and cold work, of every metal we could find, without ill effects and without complaint, even when filing dust as we demanded. The only sign of distress he showed was annoyance at being kept awake, as he in in the habit of nocturnal hours. Brother Linneaus became quite frustrated at the lack of any indication that Tenk might be anything other than an ordinary dwarf and began interrogating him as to his history. We all made our own inquiries as he worked, as it is known that the sleep deprived are more likely to be truthful, and we found ways of prolonging his tasks so that we might find a flaw that would reveal his nature.

Tenk claims that his parents were also short in stature, but also that his own development was stunted from surviving bone feveras a young child, after which time he would not have grown any taller. His parents are dead, he claims to be the only surviving child of his family, and he has yet to start a family of his own. His small stature made him unsuitable for regular labor, so we was apprenticed to his uncle to learn the craft of clockwinding. He is able to read and write, which is quite unexpected. He was nearly asleep on his feet when he showed us the astromonical charts that had been passed down in his family, by which one adjusts a clock to agree with the movements of the stars, and which he had improved with his own celestial observations. The documents were extremely impressive and written in a logical manner. Brother Johann ventured some propositions from the Euclid, which Tenk found genuinely curious and he was able to provide logical solutions in his own venacular. He would appear to have a natural aptitude for geometry. This line of questioning was the only thing which provoked Tenk into showing any spark of interest in the entire affair, even with the fatigue we induced in him.

In light of his work, we find no reason to declare him a heretic, but his unusual appearance bears monitoring. We find his work to be founded in Science and Logic. If he is indeed an anomality, he is a very careful one, as indicated by his responses to our interrogations. Tenk is reclusive by nature, it took many nights for a Brother to find him again and place a mark on him so that he may be identified as the man we have examined and not a future son. His ears are in fact malformed, as we suspected, but so also are those of others who are deformed by the bone fevers, so it is not enough to condemn him. His blood is red and has no remarkable qualities. His natural grasp of mathematics could be useful to the Order, if we could endeavor to find a way to cultivate it… 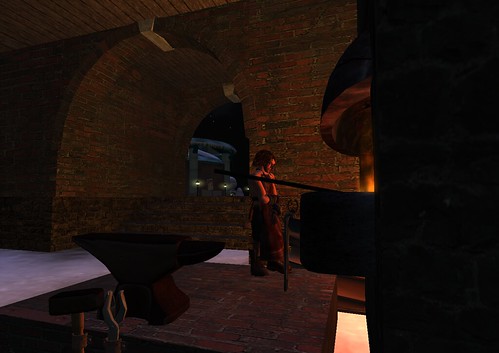 ==Early Life==
Mr. Tenk is assumed to be a native of New Babbage despite having a trace of an accent. Odnar Halberstadt of Falun claims him to be kin, most likely a distant cousin, but it is hard to say his exact relationship due to the extended family clan system of the mining towns to the north of New Babbage.

He is a devout follower of the Church of the Builder and often discusses mathematics with the monks in the old city. His particular branch of study is probability, the pursuit of which has caused him to be barred from several gaming houses. Tenk’s current public life as mayor of New Babbage has taken him away from his research, despite the promptings of the Church to continue his work.

He has been known to tie fishing nets for no particular reason.

==Fae or not?==
There is speculation that Tenk something other than human, which Tenk himself quickly attributes to granny stories and other irrational superstition. Gamblers will try to shake his hand if they see him on the way to the tables. Some paranormal investigators would point to two particular slips that may prove he is something other than he pretends to be:

-Several persons have reported dreaming about Tenk, always at what appears to be a small house in a deep forest. Tale: Lilli's Dream

-Shortly after the elections, he went on an unexpected drinking binge, his drink of choice being soured milk, as documented in a poem written for his second rezday by Marion Questi. Poem: Tomte

==Noteworthy events==
*Became second mayor of New Babbage after winning the elections of January/Febuary 2009.
*Was inadvertently responsible for killing the Martians
*Was trapped in a giant milk bottle by Doctor Obolensky in June of 2009, triggering the ObolenskidoniaIncident.
*Briefly fell under the influence of Mr. Underby during a period of heavy drinking after his return to New Babbage.