The wiggyfish is a large specimen that lives in the depths of the Vernian Sea. It has lobed fins like the ceolecanth and a lantern proturberance on the forehead.

Wiggyfish enter the shallow canals of New Babbage to spawn and have been known to attack passing pedestrians. Residents are cautioned to take extra care not to fall into the canals during spawning season. In years past there was a tradition of trapping a fish in the canals by closing the sea gates, so that young men could test their bravery and skill with harpoon. 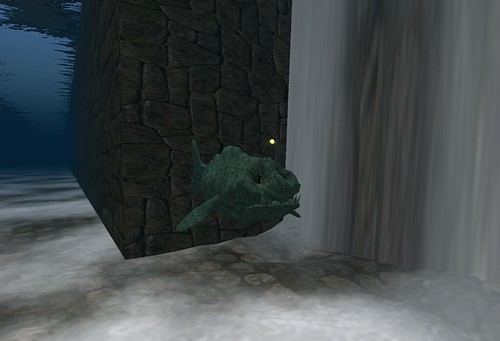 While cruising about in the Vernian today, I found a rather odd fish floating on the surface. It’s appearance is different from other fish I’ve seen. The fins are lobed, and there is an odd appendage on it’s head that glows weakly with a cold light, like a firefly. The fish is quite dead, but freshly so, and has not yet started to decay.

I decided to bring it back with me. Presently I have it stored on ice in a wooden box by the dock. I’ll try to get someone from the Paleozoic Museum to take a look at it. Perhaps it’s worth something. Anything would help as I’ve had little luck in finding anything valuable at the bottom of the Vernian Sea.

==Summary of events related to discovery==

Two weeks after its capture by Captain Undertone, the strange fish disappeared. It was thought, at first, that someone had stolen it. However, after a couple of days, reports of sightings of the fish in the canals started pouring in. The fish tended toward aggression, even leaping out of the canal to attack people standing on the edge. Miss Jedburgh Dagger was finally able to dispatch it, but discovered that its egg sac was empty.

Within a couple of months, Captain Undertone opened his Wiggyfish Cannery, devoted to processing and canning the strange fish. Its palatableness, however, is debatable.