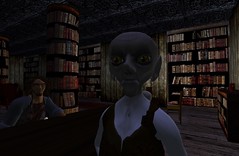 ”i works for Underby like… as an assistant, an whatever else e needs… i’m willin t’ elp oters too, tho. it’s nice city, it is, i likes the soot and the darkness ever so much. and, miss Kaylee, she is darlin’ pretty, she is, and gots a gleam in er eye i likes. i may stay.”

==History==
Pippin Jollygoodfellow Steamer, also known as Pipplion Wensel Steamer, is a hob serving as a familiar to Mr. Underby. He was freed from his contract by Underby’s apprentice, Lo. Soon after, Mr. Tenk went into an unusual fit of rage and chased him out of town.

He was rumored to be inhabiting at the Dagon Temple in Vernian Sea, and was summoned by Underby while Underby was in an incorporeal state. Pip renewed his bond with Underby after his return on the Ghost Train, willingly or not it is not known.

Pip was ordered to stay behind to keep an eye on Underby’s wife, Phaedra, when Underby departed for Ravila on a tramp steamer heading south out of Clockhaven.

While living with Phaedra Underby, he fell into a territorial feud with Pocket String over who was to mind the fires in the bakery ovens, which was the source of considerable hijinks and damage to Phaedra’s business. Eventually he returned to live with Mr. Underby at the Bucket of Blood.

It was revealed that Pip was actually a Homonculus when Mr. Underby used him to attempt to frame a priest in murder. Pip taunted Brother Lapis, recently arrived from Ravila, into arresting him, then Mr. Underby used his power of suggestion to gain access to the cathedral dungeons and slip a knife into Pip’s heart. The Church claimed the act of causing an automaton to cease functioning was not murder and the case was dismissed.

Pip was a great lover of song and the dance. He was often seen dancing on the roofs of Clockhaven and always had a jig ready when Bib Blackrain took up his fiddle at the Bucket of Blood. I Have No Idea What She Wants

===We Were The First===
we were the first, and we shall be the last

when the world opened up like a flowers morning yawn

we danced in the hills and sang, drinking dew

with our songs came the flying birds

with our laughter came the running beasts

in the evening around the great fire

we told our stories and reveled in the night

sister midnight she was jealous

of our laughter and our songs

they should be ours, she said, ours alone

we created this world, and the darkness all around

so she travelled to see big swifty

as he sailed across the blue sky

she wept and wailed awful hollered

bring our children from out the ground

now’s the time for them to shine

banish the laughter and the singing

lest our people die in silence

and big swifty saw she wept

and he saw the ache inside her

so he pointed to an ash pile and smiled upon it

and the ashes crawled and shuffled

and the ashes moaned aloud

and the ashes watched our laughter and they slowly tried

then the ashes stood up tall

looked down on us and sneered at our joy

when they saw they could not join us

they had to have it and so they slew us

one by one our people fell

to the dirt and to the ashes

one by one our voices called out

but sister midnight turned her face

some were hiding when the death came

some hid by and watched the horror

through the screams and the ichor

they held their tongues

in the morning crept away they

hid themselves under the grass

someday someday we will come back

to the fields where laughter echoed

to the grass where dancing lived

we sang then and we will sing again

we were the first, and we shall be the last

Blog:  I Have No Idea What She Wants

Blog: The Beginning of the End for Pip