Most recent revision is shown below, by . 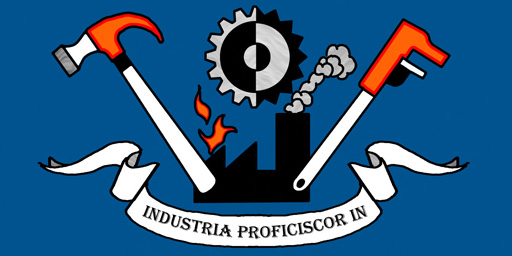 The original flag was created by Eggberta Echegaray. The symbolic references are as follows: Hammer and Wrench are symbolic of “Work”…The factory emitting fire and steam is symbolic of “Industry”…the black and white “Cog” represents the sun obviously, or as I like to see it, a “steampunk sun” as how steampunks would like to see the sun as being…a Cog, for the Cog represents the “future”:) As for the black and white colour in the Cog, they are symbolic with regards to the good and the not so good of the Victorian time era…ie: the rich, the poor…the haves and have nots, which was very indicative of the time era.

This was declared the official flag of New Babbage by Mayor Tenk over several variants which had appeared in the city, listed below.

A variant “cloth” version was made by Breezy Carver and Skusting Dagger. It is often seen on houseboats.

The “badge flag” appeared late in 2008 was created by Skutsing Dagger, using a screenshot of the badge revealed by Mayor Sprocket at the December 2008 Town Hall meeting and incorporating elements of the old flag. It was used in the Founders Week Regatta of 2009. It is sometimes flown, but it is not the flag of New Babbage.

This heraldic variant was created by KlausWulfenbach Outlander during the infamous mayoral election of early 2009. It is used decoratively and popular with the militia. 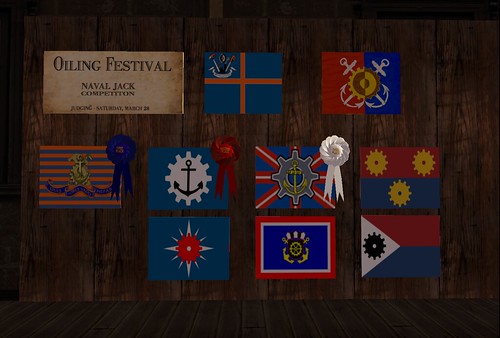 A Naval Jack was selected from a field of nine entries at the 2009 Oiling Festival. Winning entry was created by Aeolus Cleanslate and chosen by the popular vote of the citizenry. This flag identifies ships used in naval skirmishes.