Snow has officially fallen in New Babbage. The sights are now made new and charming in a very cold and slippery way. I have spent most days perched before the fires at the CocoJava sipping various hot drinks and chatting with the others who come in stomping the snow from their boots.

My brother has been keeping regular contact and I have spent many long afternoons copying out runes from books onto large sheets of clean paper and sending them back to him. His handwriting is horrible so I can see why he needs me to do it, but I will be happy when the terms of my service are completed.

I made the long and dangerous walk to Clockhaven yesterday to have a little chat with Mr. Underby only to discover he’d been trapped in a snow-drift. He looked almost like a poorly made snowman, with that top-hat of his and his eyes the only thing visible above the drift. I tried to hide my amusement (he really did look *very* funny!) and cleared the snow away from his face so he could breathe and was just about to explain why I couldn’t possibly dig him out with my bare hands when Tinus, Mr. Tenk and Mr Wirefly appeared with shovels.

I am not sure that there wasn’t something suspicious about the three of them, but they did eventually help him out. I am afraid Mr. Underby was too affected by the event to have a proper conversation so I made him a pot of tea and sent him off to bed with a stern warning to keep warm. I shall send him a package of lemon-infused tea first thing this afternoon, I think.

Well, I think it is time for my own morning cuppa.

Tinus Koskinen: Hello Mr. Underby how are you? 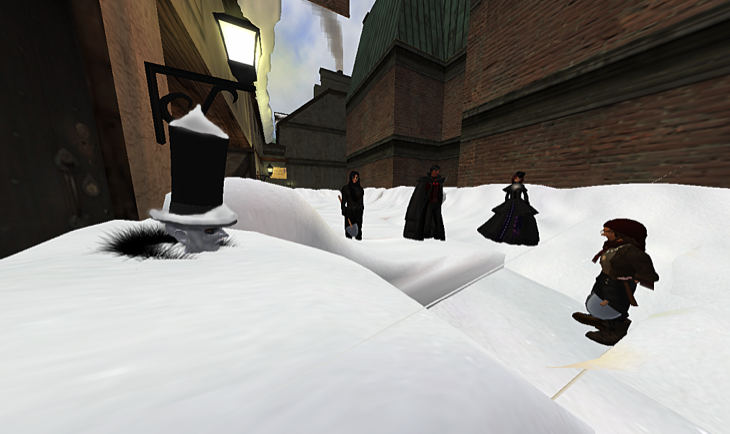 ”A huge snowdrift slides off the roof and buries Mr. Underby”

Mosseveno Tenk: it slid off the roof. what were the odds of *that* happening.

Mosseveno Tenk: would have killed him

Mosseveno Tenk: guess we should go dig him out

”the boys move on to shovel the walks, then return to find Stargirl with Underby”

Stargirl Macbain: But they have shovels apparently.

Rip Wirefly: shouldnt we be shoveling him out and not putting more on?

Mosseveno Tenk: could have been icicles.

Tinus Koskinen: oh sorry meant to throw it in the other direction…((fills in Mr. Tenks holes)).

Mosseveno Tenk: pull yourself out, sir

Rip Wirefly: Hey, he has the top hat, think we need another snowman?

Mr. Underby: That snow is a hazard. 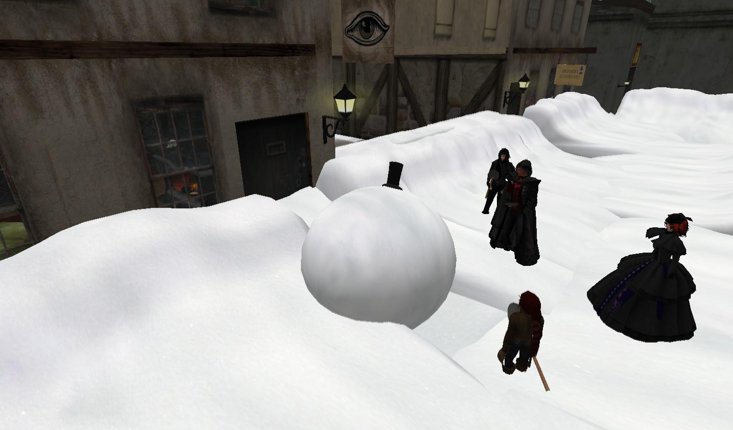 ”Another huge drift slides off the roof and falls on Mr. Underby”

Mosseveno Tenk: how did that happen?

Tinus Koskinen: Don’t worry sir we will save you.

Mr. Underby: Good day to you all!

Stargirl Macbain: Oh bother, I was hoping to catch him in a good mood.

Tinus Koskinen smiles “pleasure to be of service sir”

Mosseveno Tenk shouts cheerfully: let me know if i can be of further assistance to you sir!

Mr. Underby curses under hus breath as he drips in front of the fire

Mosseveno Tenk: i think a nice hot toddie is in order, boys 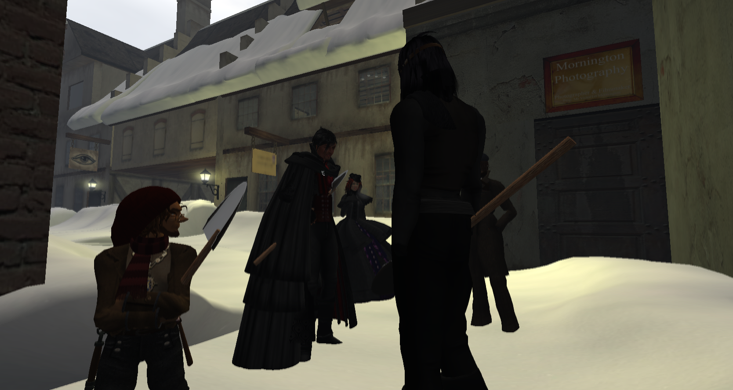 Rip Wirefly knocks victor on the head with a shovel

Rip Wirefly looks at the massive amount of snow and laughs

Tinus Koskinen: Particularly at the end of the lane.

Tinus Koskinen: so who suffers from the boyz of babbage on a rampage next?

Mosseveno Tenk: He *deserved* it

Tinus Koskinen: how was your visit with Mr. Underby, Miss MacBain?

Stargirl Macbain looks intensely pleased with herself, “Oh, I would say things are going exactly as I’d hoped.”

Stargirl Macbain: Oh nothing, nothing. I’ve made him a nice cup of tea and sent him to bed.

Mosseveno Tenk: mess with me, will he?

Tinus Koskinen: Thumper is quite the acrobat

Victor1st Mornington: he’s always like this when he’s outside…

Stargirl Macbain: Must be the freedom of fresh air, victor.