In January of 2010, citizens were puzzled by a series of barrels which fell from the sky.

Soon after, several citizens reported being accosted by flying automatons which exploded nicely when shot at. Less trigger happy citizens found out that the automans were merely scanning, looking for someone, and not attacking. The testimony of eyewitness Thaiis Thei:

”When I arose this morning I noticed a strange noise emanating from the exterior of my humble yet superlative establishment. Regarding it via the fenestration, I noticed a mechanical contrivance which was moving around with much promptitude, following the contours of the building. However, no sooner had I made my egress than it immediately approached me. Proceeding to pursue me emitting menacing articulations it declaimed in a mechanical modulation “Scanning subject. Result negative”. Presently some of those smelly, despicable urchins arrived, and it turned its artificial attentions to the scanning of those same creatures, with likewise results. It seemed a quite limited mechanoid as it would repeatedly direct its attentions to the same person again and again, clearly not aware it had already done so previously. The gathered assemblage examined it closely and it was found that the propeller at its zenith could be stopped by the pressure of one’s hand, though this seemed to make no difference to its ability to make kinematic progress. After exhausting exploratory options I fetched a firearm from my residence and blew it away. BWAHAHAHAhahahah!!! /me coughs politely. A most satisfying explosion was effected.
”
Recording

Lastly, a rocket ship of similiar manufacture crashed into the roof of Ruby’s Pub.

Jesper Renfold of the Van Creed Society called an emergency town hall meeting to inform the citizenry of the growing danger, but he was killed by Willard Steamweave before any useful information could be given. The source of the barrels are still a mystery.

The moral of the story is that if you have something important to say, get to the point quickly, because you might spontaneously combust during your pompous grandstanding. 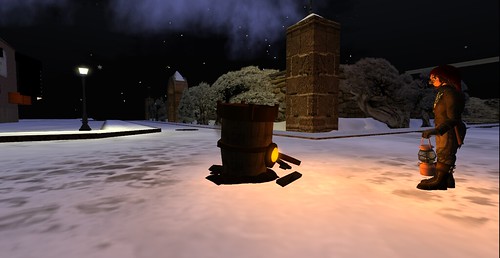 For those that solved the mystery, it was revealed that the barrels and the rocket had actually been launched from the moon by Willard Steamweaver. The barrels contained scanners that were programmed to find an urchin named Tricky Jinx. The barrels remain in the city so that tourists and newcomers may enjoy unraveling the trail of clues associated with the Shadow of the 13 story.