Most recent revision is shown below, by Augustus Dayafter.

”’Creighton Guisse”’ is the 9th Marquis de Carabas, which is a small island territory of France that is located just off the Côte d’Azur. He is, at present, traveling on a world tour and currently residing in New Babbage. 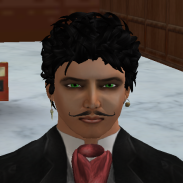 ==Biography==
===Early Life===
Creighton is the son of the former Marquis de Carabas, and grew up in the coastal manor house of his father. Creighton’s mother passed away during childbirth. There is not much to tell of his childhood, other than his rising interest in the art of illusion, of which, his father did not approve. Creighton was sent to a boarding school when he was old enough, his father hoping that would cure him of his obsession with stage magic.
===Education===
During his time at the boarding school, Creighton’s talent in stage magic flourished, as did his quest for occult knowledge. Whilst there he also began having quite an interest in the fairer sex. During his teenage years, he used his prestidigitation skills to get the attention of not only the girls, but their families as well. Under the tutelage of several local “spiritualists” and other stage magicians, he learned the arts of the confidence man. Thus began his early career in getting what he wanted out of life.
===Becoming a Marquis===
After his graduation from the university, he went home to Carabas. His father, thinking his son healed of his silly obsessions, began teaching him the finer points of being Marquis. Soon thereafter, Creighton’s father mysteriously took ill. Creighton “hired” several of his friends to take care of his father and the island, while he began wooing the ladies of Beaumont-sur-Mer, also along the French Riviera. After Creighton had doubled the fortune of his father, he returned to his island home. Not long after his return, his father passed away, leaving Creighton as the 9th Marquis de Carabas.
===The World Tour===
After taking over as the Marquis, and looting everything he could from rich widows in the area, he decided to go on a tour of the world. He left his friends in charge of the affairs of Carabas and headed out. He is currently in New Babbage, attending social events and performing magic when he has time.
===Role Play Notes===
Only the fact that Creighton is the Marquis de Carabas and that he performs stage magic is in character knowledge.