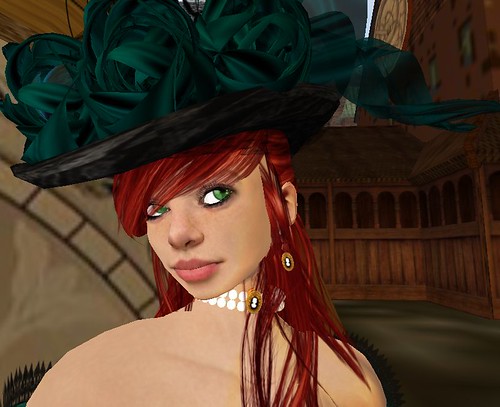 There is something about New Babbage that is difficult for even a wordy girl like me to elucidate….it just resonates with me. There is something that warms inside me…. when i walk down the streets or by the waters of Port Babbage, or the Canals of Wheatstone, or the Chimney vista of the industrial area… i look up at the buildings, the soot, the creations eyes filled with AWE and i get a sense that ANYthing is possible!

Capt. Red is a Welsh born Lady of an eccentric shipbuilding family. An irreverent hoyden from the cradle she married young and went to sea with her piratical cousin & husband who was a better pirate than swimmer as he perished after falling (not pushed!) overboard as tea was called one day.

Deciding that the sea life was for her she ventured forth with her loyal (but cutthroat) crew and continued with his work until she retired after selling the Queen Anne’s Revenge (twas no Blackbeard who had the ship but a Redhead…the public are are so easily duped!) settling in the fair sooty city of New Babbage.

A new chapter of her life has started in Wheatstone Waterways, New Babbage became her home where she opened Llewellyn Industries, Llewellyn Factory Gardens, & the great Obolensky Metal Steampunk Treehouse all of which properties are open to the public. A Caledon Oxbridge Professor, Capt. Llewellyn is also a generous patron of builders and dress makers, an arbiter of fashion, noted interior decorator, an expert historian of the undergarment and female fripperies and humble and modest to a fault. Invited to speak at the grid famous New Babbage Salon the daring Capt. Llewellyn gave a detailed talk on Amour! 2000 Years of Corset History in 20 Minutes with Illustrations!. She is also a loyal and active member of the New Babbage Ladies Fire Brigade, and other civic causes, hostessing parties and events, she has striven to give back to the community and to make up for her profitable years of dissolute plunder.

Oh and do just call me Capt. Red…grins the grrl part was given to me in affection by my crew and with disgust from those I used to plunder….