Dr. Augustus Dayafter is a medical man, alienist, and professor. He is also an investigator of the paranormal and researcher of mystical arts. Good company and conversation are the fine points of this rather outstanding gentleman with a penchant for flash clothes, hot jazz, cold drinks, and dirty blues. 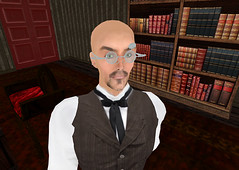 ==Biography==
===Parents===
”’Sir Lieutenant Colonel Kirkland Merryweather Dayafter”’- Knighted for valor to the crown during the campaign in “India”. Returned to “England” long enough to move he and his family to his newly appointed land in “India”. Sir Dayafter took his pension and started the Dayafter Trading Company, a very wealthy and successful import/export company. Sir Dayafter passed away from an infected wound and very poor medical care, prompting Augustus to become a doctor. ”’Aurnia Eabha Dayafter”’- Daughter of an “Irish” lord. Aurnia is a gifted musical prodigy with a head for business. She took up the reigns of the business after her husband passed away. She began studying the mystic arts when they moved to “India”, and was already an accomplished alchemist.
==References==