“Who was that masked woman?” Emerson, having changed out of his Knight Crusader costume, tipped his head back and exhaled a plume of violet smoke up toward the ceiling of the Gangplank where he, the Squire, and Count Bologna had retired empty handed. It was just past five-thirty AM, the only other person present was the twelve-year old fire-cracker, Petra Flax, Emerson’s personal bodyguard, who was asleep on the couch in the corner. Outside, the sun was just rising above the horizon, pushing the night’s shadows to the corners as early risers began to stir. “That woman,” Emerson shook his head once again, “she  seemed so familiar and yet so mysterious.”

“We are dealing with a powerful adversary, my friend,of that there is little doubt.” said the Count. “She is some sort of a super woman; a wonder girl; a super-wonder female; unstoppable. We can’t blame ourselves.” Count Bologna looked at his empty glass and attempted a sip on the chance there was still a drop or two of alcohol mixing with the melting ice cubes. “Is the bourbon still on sale for half price?” he asked, turning to Emerson.

“Half price?” Emerson scrunched his eyebrows together. “We’ve never sold bourbon for half price.”

“No? No matter.” The Count snapped his fingers. He held his empty glass high. “Barkeep, another double bourbon. Add it to my tab.”

“You two suck,” sneered the Squire as he poured a double shot of bourbon. “She duped you with such an obvious line! An explosive in the clockwork security system—give me a break! That would damage, if not destroy, the jewels along with half the museum.” Malus shook his head in exasperation. “I was meant for so much more in life than to be surrounded by such incompetent idiots. Here’s your bourbon.”

“The Squire has a point,” said Emerson. “We need to be better organized to keep this sort of set-back from occurring in the future. We need a union.”

“My God man, have you gone mad?” exclaimed Count Bologna, reaching for his bourbon. “The Blue Blood Avenger would never lower himself to join a union.”

“You’re right,” Emerson sighed. “Union sounds so common. What about ‘League’? That has an air of exclusivity about it. We could be the League of something.”

“How about League of Incompetent Jewel Thieves?” the Squire suggested.

“Now we are getting somewhere,” said the Count, who’d finished packing his pipe to overflowing with Emerson’s purple sage, and was now looking about for some Lucifers with which to light it. “But league on its own will not do. No, we need to advertise our greatness with a word like exemplary or exceptional.”

Emerson snapped his fingers. “Extraordinary!” he said with a grin.

“You are truly gifted with words, my friend, extraordinary it is,” said Count Bologna. “Might I trouble you for a light?”

“I meant you,” the Squire sneered.

“League of Extraordinary Avengers for Justice,” said Emerson. “It may not be one hundred percent accurate from a technical or legal standpoint, but it should soothe our heroic and noble egos.”

“I want to be in your club too,” Petra said, stirring from the couch in the corner. The thirteen-year old girl sat up and rubbed the sleep from her eyes. “I gotta mask,” she got up from the couch and reached for her Louisville slugger she’d propped against the wall the night before. “I can be The Troublemaker.” She gave the bat a couple of practice swings.

“Watch it!” the Squire complained, “You’ll break something or—”

Without warning the front door to the Gangplank flew open, bouncing with a resounding bang off the wall; all heads turned. Framed by the doorway was an imposing sight, a six foot tall, barrel-chested figure wearing brown coveralls and a welder’s mask detailed with an ogre’s face of dubious quality painted on the front of the mask. Clutching a large bale of purple sage in each hand, the imposing figure stood there for a second or two as though allowing his eyes to adjust to the dimness inside the bar.

“My God man!” the Count exclaimed. “That’s quite an entrance.”

The new arrival took several steps into the bar, dropped the two bales on the floor, then removed the mask. “Weren’t no way to avoid kicking it open, I had both hands full.”

“What about the mask?” Petra asked. “That’s a neat paint job you done on the front of it.”

“Oh, this? Just doing a little maintenance out front is all. Cracked the right hub plate on the rear axle of the wagon, on a rut coming up Prince Dakkar Blvd.” the farmer explained. “But listen, this ain’t no time for pleasantries. There’s a Martian fireball heading straight for New Babbage and I mean to collect payment for this here delivery before the impending disaster gives Lighthouse an excuse as to why he can’t settle up his accounts.”

“A FIREBALL! Holy Cripes!” Petra hollered. “Are you sure?”

“My little cousin, Jim Babby junior thinks it’s a fireball but I ain’t so sure now,” said Cleetus. “I have a feeling what’s coming is a whole lot worse than your typical catastrophic disaster.” 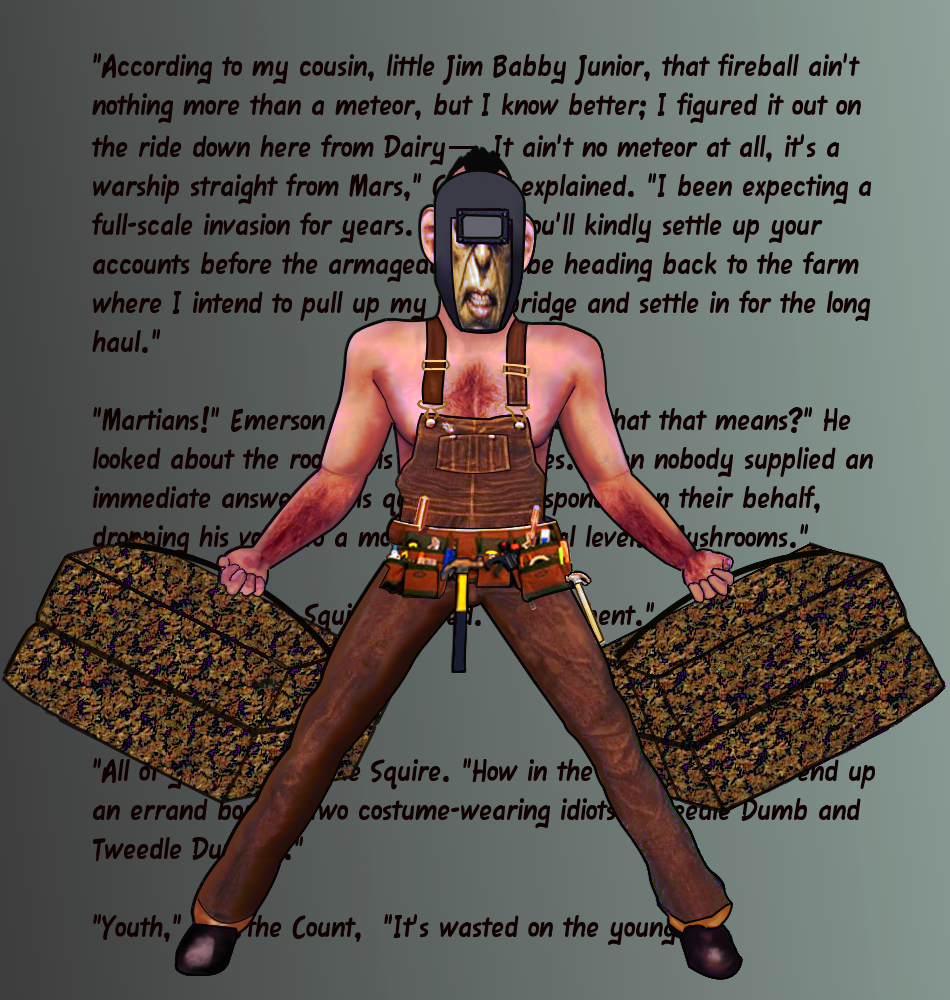