“I call to order this first official meeting of the New Babbage League of Extraordinary Avengers for Justice.” said Emerson. “But if that is too much of a mouthful we can simply say the NBLOEAFJ.” Using a wooden spoon as a stand-in for a gavel, he rapped the kitchen countertop in an officious manner. Once again he was dressed as the Knight Crusader.

“NBLOEAFJ?” said Squire Malus with a sneer. “That doesn’t even make a word!”

“It is what we call an imperfect anagram,” said Emerson.

“An anagram of what?” Malus persisted.

“Squire, try to stay focussed on the important issues, we can analyze trivialities over midnight smokes anytime.” Emerson sighed.  “Okay, I will now take roll call.”

“Roll call?” said Cleetus, looking about. “We are in a kitchen and there are only six of us,”

“Do you mind,” said Emerson with an edge of frustration to his voice. “It’s for the minutes—”

“I’ll write them up later,” said Emerson. “Right then, if there are no more interruptions I’ll commence with the roll: The Troublemaker.”

Petra put up her hand. “Here, Knight Crusader,” she replied adding a swing of her bat for emphasis.

“Hey, keep that to outside, this isn’t the Gangplank, you’ll break something.” said Emerson before resuming. “The Blueblood Avenger.”

“At your service,” Count Bologna smiled and nodded from the stove where he was brewing up some of Emerson’s coffee.

“The Toolbox,” said Emerson, then cued Cleetus who was snickering about something with the Squire, “that’s you Cleetus.”

“What are you talking about,” Cleetus replied, “I ain’t part of your fancy costume party.”

“But you got the bestest mask,” said Petra. “You should join-up.”

Squire Malus rolled his eyes and raised his hand.

Emerson nodded then looked over at Thomas. “And since I am trying to be inclusive, and we are not strict about costumes, as you can tell by the Squire’s lack of willingness to have fun— Thomas, you can be The Prince.”

A knock at the back door arrested the conversation. Emerson looked about the kitchen then nodded to Petra. The girl, bat ready, went to the door. “Who is it?” No response but another knock, this one more insistent than the previous. Petra opened the door to reveal a masked woman wearing a blue showgirl’s costume and red cape,standing on the back steps.

“You!” said Emerson to the woman. “Cog Blocker!”

“Vile battle-ax, be gone!” The Count exclaimed, throwing up a hand, as if blocking her from his view would make her vanish.

“Where are our jewels?” Emerson asked as the costumed woman strode into the kitchen, cape fluttering behind her.

“Forget about the jewels,” said the Cog Blocker. “We have more important matters to attend to. I take it the purpose of this meeting is to discuss the impending Martian invasion.”

“How do you know about that?” Emerson narrowed his eyes.

“Knight Crusader, you dumby,” Petra laughed. “Don’t you know who—”

“I have my sources,” the Cog Blocker cut in, interrupting Petra before she could finish. “Now, do you have a plan or not?”

“As a matter of fact I do,” Emerson nodded. “And you have provided me with the perfect segue,” Emerson paused and removed a large towel that had been draped over an easel. “Okay, everybody look, I have made a diagram to assist with the more complex parts of the plan.”

“Why were you looking at me when you said that?” said Cleetus, hands on hips. “You think I’m too ignorant to understand the complexities of your plan on account of I come from Dairy? By the Builder, you get me right some roiled-up, Lighthouse.”

“What? No, listen, let me explain.” Emerson turned the wooden spoon over and used the handle as a pointer. “The problem: we have a Martian warship approaching, one that is probably full of horrible monsters. It’s navigation system is locked onto this bracelet.” Emerson then held up the bracelet. “The solution is simple. We have a giant pit in Clockhaven so all we have to do is throw this bracelet in the pit, the warship flies in after it. Once it’s inside we set off a little dynamite to collapse the pit and the Martians are trapped. It’s a perfect plan, what could possibly go wrong?” Emerson smiled.

Those in the kitchen remained silent for several seconds after Emerson detailed his plan. Thomas was the first to speak. “First, the bracelet cannot be ‘thrown’ into the pit. The gems are delicate and will shatter after a fall like that.”

“Emerson shrugged his shoulders, “Not a big deal. We still have several hours. Instead of throwing it we climb down and place it. Same end result.” Emerson smiled again.

“There is one other problem,” said Thomas, stepping forward. He took a pencil from the counter and positioned himself in front of the diagram and used the pencil to point. “That pit, formerly known as the Gangplank, is directly over the lair of the Sisters of Dunsany—the purest, though admittedly the most unpredictable and dangerous members of my fold. If the blast went deep enough, which it appears it has, there is a very high probability their lair was breached.” Thomas added to Emerson’s diagram, drawing in the lair of the sisters. “Climbing into a pit with them would be an act of folly.”

“What other choice is there?” said the Cog Blocker. “It is our civic responsibility. If you are too craven give the bracelet to me and I will climb into the pit.”

“Tars and I will accompany the young lady,” said Thomas.

“Give the bracelet to her?” the Count shook his head. “After she stole the Ravilan Crown Jewels from us? Please.”

“I can’t say as I trust them two shady-looking buggers neither,” said Cleetus, pointing to Thomas and the Thark.

“I want to climb into the pit,” said Petra. “No fair not letting me in on the fun.”

Emerson looked around the room. “This is not a job for any one individual,” he struck a heroic pose. “This is a job for the NBLOEAFJ.”

The Squire rolled his eyes. “This is going to get messy.” 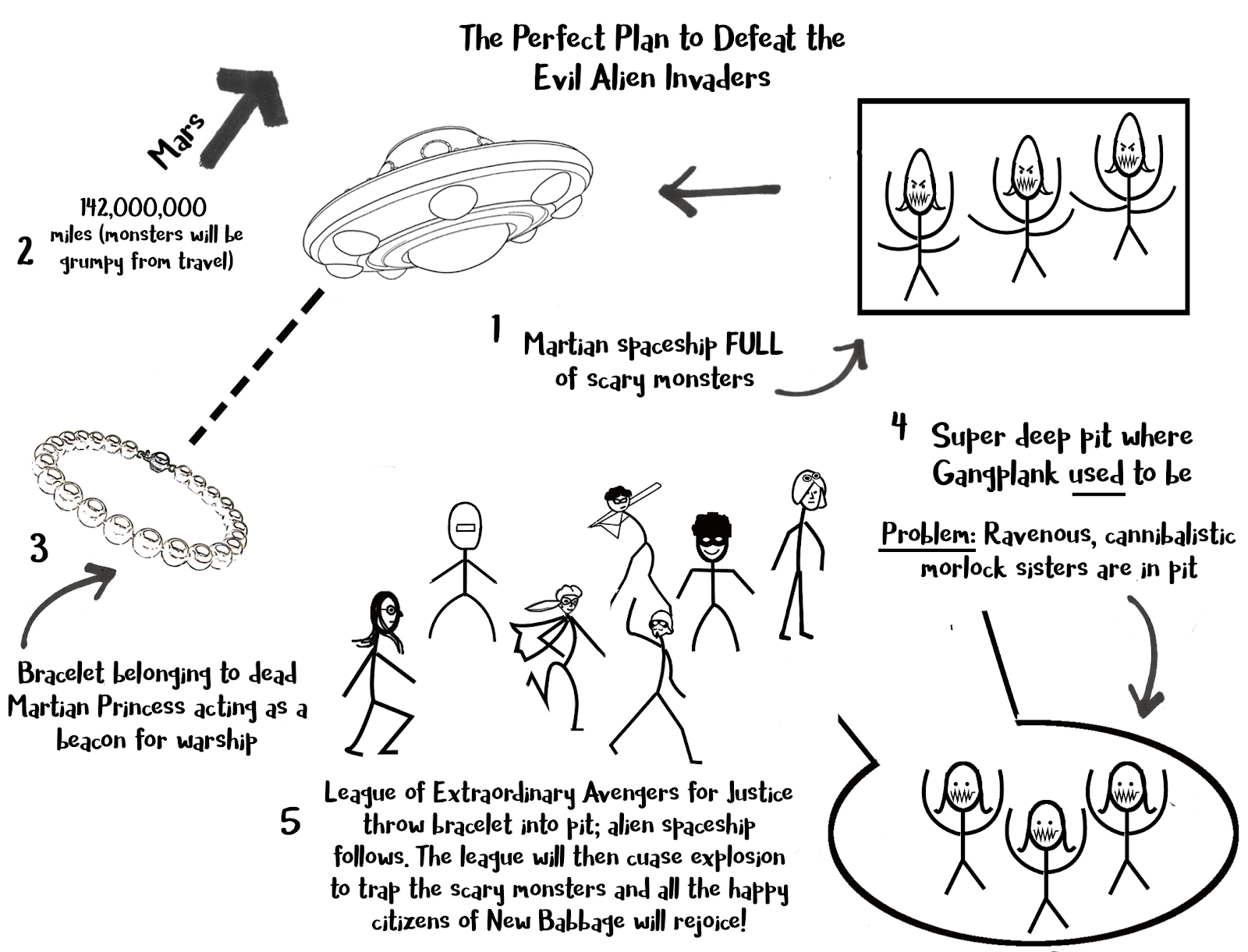