Well, i’d heard about this thing as had been found next to Loki’s place the other week, an had gone an seen it with some of the other urchins, but now i heard it had been stood up, so i went to see again.

[img_assist|nid=1135|title=|desc=|link=popup|align=left|width=640|height=480]It’s much bigger looking now, and a bit scary, but very interesting!  i stepped forward to have a closer look, and tripped over a rope some daft so an so had pegged all round the thing!  Fell flat on me face, an had to rest a bit leaning up against one of the wooden bits holding it up till i had recovered.

Then i lay down where it had been in the earth, an pretended to be the statue fer a bit, just to wonder what it must have been like down in that cold earth fer so long…  It was boring, so i found one of the trowels they had left around an helped out by scraping down in the earth like them archaeologists do, though i didn’t find anything.

All that thinking and digging sort of tired me out, so i curled up on a bit of dug uppavement an had a snooze for a while.  It was a good snooze, but had some weird dreams, the sound the statue makes is kinda comforting when you sleep, like when we all bundle together in the winter fer warmth, an you can hear the next chaps heart thumping in yer ear….. 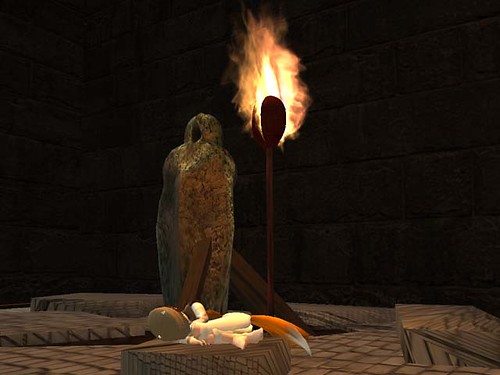