Lawyers are from Mars, Accountants are from Venus

Nyjul Caythun’s office wasn’t Nyjul Caythun’s office. The tubby London solicitor had made a special trip to New Babbage to, as my father so unsettlingly phrased it in his letter, “put my affairs in order.” Lacking his own pied-à-terre in town, Mr. Caythun (one of several lawyers my parents keep on retainer) temporarily occupied the office of a local accountant who was only too happy to accommodate an old friend and fellow professional.

The lighting in the office came from two large windows and one small desk lamp. Overstuffed with book shelves and file cabinets, the place was obviously meant for a single occupant whose space requirements were minimal. Given the close quarters, I would have expected the office’s owner, Miss Caldecott Lisa, to have stepped out while I conducted my personal business with Mr. Caythun. Instead, the lady with the youthful face beneath a pile of grey hair remained in the office working at a small table off to the side. Annoyingly, she seemed to be taking some interest in, what should have been, my private consultation. Even Miss Lisa’s ginger tabby — flicking its tail back and forth as it rested atop a file cabinet behind me — seemed to be observing me as intently as if I were about to magically materialise a tray of tuna. The attention was doubly unwanted as the meeting got off to a very bad start.

“Here’s a check for you,” said Mr. Caythun as he reached over the desk and tried to hand me the slip of paper. “From your parents, of course.”

“Then you weren’t told everything, were you, Mr. Smarty-Boots?!”

Caythun looked to the accountant and said, “Perhaps Miss Lisa should impress upon you the importance of financial solvency, Mr. Arkright.”

“Really, Mr. Caythun,” she said. I nearly jumped out of my chair when the lady spoke. The words were innocuous enough, but… that voice! Imagine an opera baritone whose throat had been invaded by an army of bullfrogs armed with fog horns. Then imagine that person in a fashionably drab grey dress saying, “I don’t think it’s my place to offer an opinion.”

With an exaggerated “Why me?” sigh, Mr. Caythun leaned back in his chair looking irritated. “Your parents said you needed tuition money.”

“Not anymore,” I replied, ” I’ve just received a grant to cover my summer math studies at Northmead.”

“And you haven’t been working…”

“Wrong! I’ve been collecting wages at a number of odd jobs. Not lately, perhaps, but I have been far from idle.”

“And you haven’t been getting your regular settlement payments.”

“Which, I thought, was the whole reason for you being here!”

“Is there anything else I need to know about?”

“Yes!” I said with pride and confidence. “I am due to receive a substantial reward for saving the Caledon railroad industry. Single-handed, I might add! (Well, nearly single-handed, but the money all goes to me.)”

“And exactly who is giving you this reward?”

“Gerard Tyvus. He owns one of the largest rail lines in the northwest.”

“How is he paying you? By check? Transfer from a local bank?”

“I’m supposed to go see him in Caledon. Get it from him personally.”

“Will the money come from his company, or from his personal account? Did he tell you how much he was giving you? Has a figure been discussed?”

My pride and confidence were starting to wobble. “No… but he said it would be a lot.”

“Yeah,” said Mr. Caythun thoughtfully. “What *he* thinks is a lot, or what he thinks *you’ll* think is a lot?”

“That’s a good question. A very good question.” My pride and confidence had done a bunk. Differential equations are so much more well-behaved than personal finances.

“I have some more ‘good questions’ for this Tyvus fellow,” said Mr. Caythun, “as well as a few for the company that’s been delinquent in its legally arbitrated obligations to you. I’m surprised you haven’t dealt with this sooner.”

“It’s easy to get distracted around here. But I was just about to leave for Caledon when I received word you were coming. I was planning on leaving this afternoon in fact.”

“And how were you planning on getting there? Air fare can be expensive. I hope you weren’t planning on using that teleportation trick of yours. You of all people should know the Transcendental Surveillance Authority takes a very dim view of your extradimensional movements.”

“It’s not as if you haven’t been cautioned,” said the cat.

Unfortunately, it was neither a dream nor an hallucination. I was surrounded by a trio of irksome agents from the Congress of Cosmic Egress.

“OH, FOR GOD’S SAKE!!!” I shouted before I could stop myself. “Leave it to my parents to hire a solicitor from Mars!!”

“They don’t know about me,” said Mr. Caythun, “or you and your space-bending tricks, for that matter. But every CCE agent knows about your meeting with the chair of the Conspicuous Transgressions Subcommittee.”

“And for the record, I’m from the planet Prylos, not Mars. I wouldn’t be caught dead on Mars… especially this time of year. The place is positively overrun with tourists.” Caythun rose from his chair and stood next to one of the bookshelves behind the big desk. “As your legal advisor, I think it would be best if I were to accompany you when you go to meet this Tyvus person. And as a guardian of continuum integrity, I think it would be best for me to make sure you get there without stupidly causing undo stress on the fabric of space-time.”

Mr Caythun gave the side of the bookcase a slight shove. It slid away to reveal a dark, hidden chamber containing a large, bullet-shaped device on runners. “We’ll take my warp carriage.” Mr. Caythun aimed a hand-held control unit at the craft and the doors built into its side swung open with a pneumatic hiss. 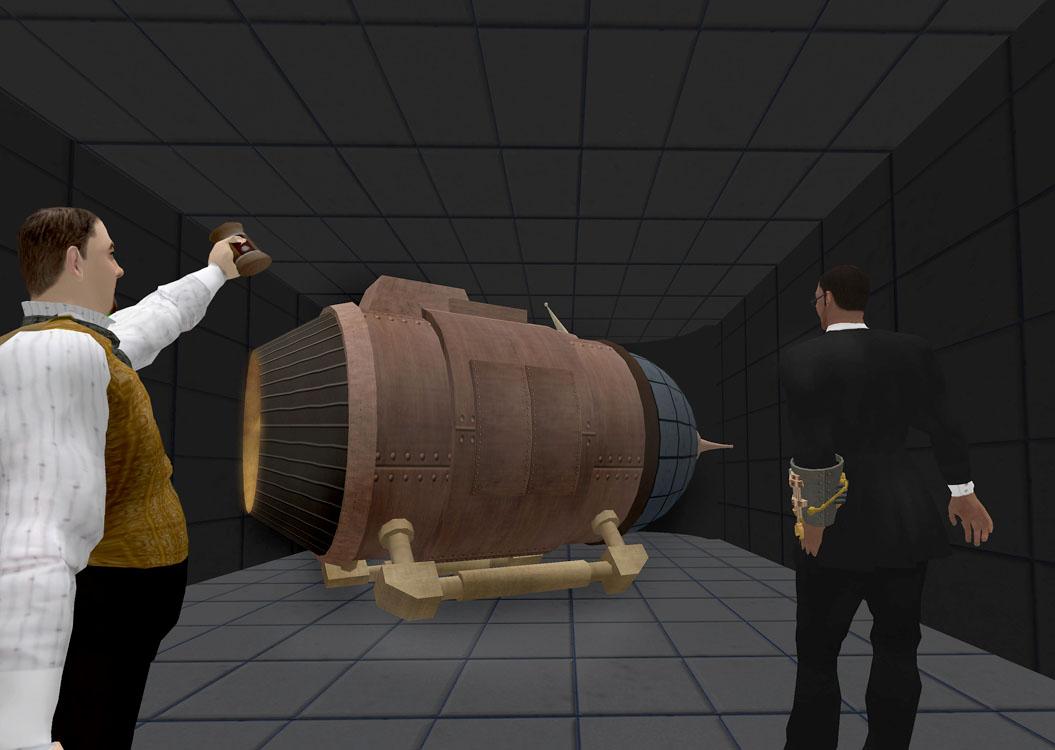 “Impressive as this is,” I said, “I’m fairly certain I can get to Caledon on my own.”

“Oh, no,” said Mr. Caythun, “If you’re determined to go slicing holes in the universe, I’d prefer we use my scalpel rather than your hatchet. Get in.”

“Hats and coats, gentlemen,” said the female alien with the backwards name and the shocking voice as she handed us our things from the coat rack.

“Take the back seat please, Mr. Arkright,” said Caythun, “I’d rather you weren’t near the controls.”

“Chauffeured through subspace. This will be unique,” I said.