“Miss Psaltery, does that manhole cover appear to have been moved to you?” inquired Bookworm, pausing by the steaming sewer cover near the entrance to the catacombs.

“It’s hard to tell,” Garnet replied, leaning in for a closer inspection. “The steam has melted the snow from all around it but it looks as though there are several sets of footprints leading to and away. Do you think the man who attacked Mr. Tripe climbed down to the sewers after all?”

“There’s also a set continuing to the catacombs,” pointed out Augustus, who managed to hold both a gun in one hand and a lantern in the other without looking encumbered.

“Several it would appear,” said Bookworm taking note of the snow that had drifted around the entrance, blown in from the constant winter wind that seemed to work magic in its ability to place drifts in the most unexpected places. “Perhaps urchins or vagrants have been using the catacombs for shelter.”

“Ain’t no urchins I know shelter in there, at least not too far into in the deep parts,” said Johnny. “Gilhooly’s one of the bravest and even he don’t.”

“I thought urchins traveled the sewers all the time,” said Augustus.

“We do,” Johnny nodded. “Nobody knows them better. But the caverns ain’t the same thing, they run deeper than the sewers.”

“How can there be caverns deeper than the sewers in a city so close to sea level?” asked Augustus.

“Thing is, we don’t see a lot of adults ever in the sewers,” said Johnny. “And the thief weren’t no urchin. An urchin might steal a bag if no one was looking but I don’t know none that’d beat a man for it so violent like was done to Mr. Tripe. I’d guess the bad guy went in there.” Johnny pointed to the entrance to the catacombs. “That’s where adults who don’t know no better would go.”

“The catacombs still seem the most likely option to me as well,” Bookworm nodded. She reached out and gave the door a push then peered inside. “With the lantern Mr. Lighthouse lent us there should be enough light. Can you turn up the wick, Mr. Dominicus?”

“I’m trying,” Augustus replied, “But I think this lamp burns dim no matter what the length.”

“There are wet footprints on the cobbles,” Garnet noted as she stepped into the tunnel leading to the catacombs and though she spoke in a hushed tone her voice seemed amplified by the silence.

Bookworm started down the passage with the others close behind her. She paused twenty paces in. “Mr. Dominicus, if you would hold the light a little higher, please.” Something on the wall had caught her attention. “Didn’t Mr. Tripe mention a charcoal line?” She nodded to the right wall. Running a short way down from the ceiling was a faded charcoal smudge that appeared at intermittent intervals all the way to the floor.

“Over there as well,” Garnet pointed to the far wall.

“Hold on, kid, it looks as though there may be something on the floor up ahead,” Augustus nodded further into the tunnel.

“Mr. Dominicus, can you increase the flame?” said Garnet. “It seems rather dark in here. I’m having trouble seeing ahead.”

“It’s this damn lantern of Lighthouse’s,” Augustus explained. “The stupid thing seems to be defective. It barely flames even at full wick.” He gave the lantern a shake as if to emphasize his point. 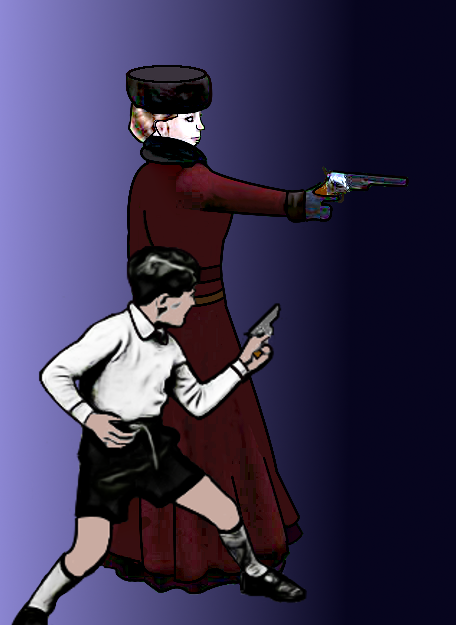 “Stay close,” said Bookworm, striding forward. “That could be the writer’s satchel.” Before they had traversed half the distance, however, they were arrested by a faint but disturbing sound echoing through the tunnel; the sound had come from the right as if from a great distance. Bookworm and Johnny drew their firearms.

“My goodness!” exclaimed Garnet. “Was that a man’s scream?”

“It could have been the wind,” suggested Augustus.

“Whatever the source, it did not seem to originate from the direction of the catacombs,” said Bookworm. “It was from the side.”

“There’s a fissure in the wall over there,” said Johnny. “There’s a bunch of them all through here. Breaks in the wall that lead to them caverns I was telling you about.”

It was at that inopportune moment the lantern loaned them by Emerson Lighthouse sputtered and spat before giving up entirely, plunging them into darkness.