Tepic sat back against the wall, content with a job well done. The word had gone out earlier in the day to all corners of the City, tonight was the night the Sneaky Vole would reopen, in it’s new and highly secret location! Different routes to the building had been whispered in ears, with countersigns and how to avoid the various traps passed urchin to urchin. The big news had been that Loki would be there, with the urchins who could play an instrument, and there would be music to dance to.

Setting it up had not been easy. He had found the old factory some time ago, and had explored all it’s secrets, including the interesting things that had been left behind by some distant owner. Old crates, nails, tools, sacks, ladders – everything that an enterprising urchin could want. It had taken several weeks, but with willing helpers he had quietly closed the gates, barricading them, sealed the stairways to the upper floors and built a maze of crates on each floor. A manhole cover had been prised up, and a route from the sewers searched out.

The drinks had been much simpler, he already had the usual urchin fare bubbling away in various locations, and the stuff that had been given to them from the other bar owners. Beer was a problem, until he had found the barrel Mr Mornington had left outside the Brunel for disposal, at least that’s probably why it was there….. Anyhow, he had left one of the crates of fancy wine as a thank you, because none of the urchins really liked the stuff……

He’d traded more of the fancy bottles for rounds of cheese and a couple of baskets of fresh bread, so there would be pleanty to eat, now he just had to hope the urchins turned up…

Several hours later, the party was in full swing, everyone enjoying the dancing, food, drink, and more importantly, the company of friends. It had been a bit of a challenge getting Miss Avariel in to the Vole, but she had always been a friend to the urchins, so it had been worth it.  Even Mr Tenk had arrived somehow, but, as every urchin knows, he is the Clockwinder, and the City is his, so he can go anywhere he likes! Tepic was careful not to let any of the urchins who had places to go drink more than was wise, and as each left, directed them to the water tub filled with fresh picked mint. The more precautions they took now, the less problems they would have in the future – the Brothers might think the urchins needed school, but Tepic knew they were learning all the time!

So now the Vole had been properly christened, and the old factory was a haven for any urchin in need, with places to kip down in the dry. It had been a good day! 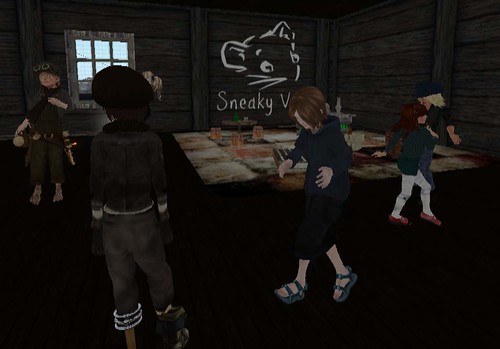 For pictures, see the link above.