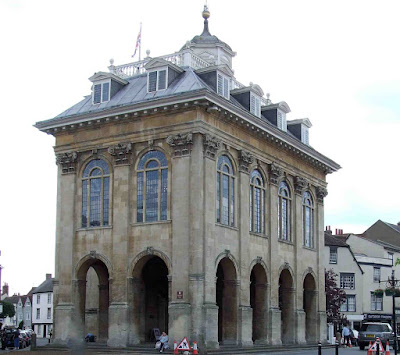 I recently found this blog, English Buildings, which includes some history about each featured bit of architecture. Its rather interesting and could provide some inspiration for builders. I feel tempted to make a version of the one pictured here – modified to have a rooftop airship dock.

In a recent post the writer tells of the practice of medieval masons using lead to add strength to architectural details:

Medieval masons used lead in their joints quite often, especially when
building intricate, willowy structures such as window tracery, narrow
shafts (mini-columns), and pinnacles. They did this by drilling vertical
holes through the pieces of stone and lining them up. Then they called
in the plumber – the man who worked with lead – and he undertook the
painstaking task of pouring the molten lead in from the top. When the
lead set, the pinnacle had a solid armature, adding greatly to its
strength.

Working with molten lead in this way must have been a
perilous business, especially if you were at the top of a 200-foot tower
at the time. But it seems to have been a common occurrence in the Middle Ages, and
helped architectural details such as this pinnacle survive from the 15th
to the 20th or 21st century.

Of all the hazards of Babbage I haven’t had to dodge hot falling lead.  But seriously it sounds like a brilliant idea. They built things to last.