A Knight at the Museum

The museum’s central hall appeared cavernous beneath him, like the great, dark maw of some oceanic behemoth stretching for a worm; the fact that he was dangling from the end of a line only made the illusion that much worse. ‘Don’t look down,’ he said aloud He held the rope tighter and took a deep breath. His fingers hurt from gripping the rope, he tried not to dwell on it.

The tolling of the bells from the myriad clocktowers about the districts of Clockhaven and Port Babbage indicated the hour to be 4:00 am, prime time to engage in work of this nature.

A click from the door below heralded the arrival of the night watchman making his rounds. Right on schedule. The watchman wasn’t long in walking around the exhibit hall. It took less than a minute before he was back at the door, off to join his partner in the lounge for a smoke. The watchman wouldn’t return until half past the hour.

The masked figure, clad in dark but for a burlap sack slung securely over his shoulder, glanced up toward  the perfect circle he’d cut in the glass of the atrium high above. ‘Not much further,’ he said to himself by way of encouragement. Another deep breath and he resumed his descent to the foyer.

Finally, with his feet firmly on the ground and a smug look upon his face, the shadowy figure stood before the Ravilan royal treasure. ‘Just a small bag full of these jewels ought to keep me flush for quite some time,’ he said aloud, his voice echoing off the polished marble floor. It was then that he took closer notice of the medium sized box mounted to the side of the display case. A ticking, like that of a clock, could be heard coming from within.

He reached out and released a small catch on the side of the box, opening a panel to reveal a complex assemblage of clockwork.  ‘All I need to do is figure out how to disengage this fancy mechanical lock and alarm system….’

So focussed on the clockwork security system protecting the Ravilan Crown Jewels, he failed to notice the shadowy figure moving in his periphery until it was too late.

Unprepared for the one, two, three series of punches that blindsided him, the darkly clad figure went down like Falunian footballer crying foul. 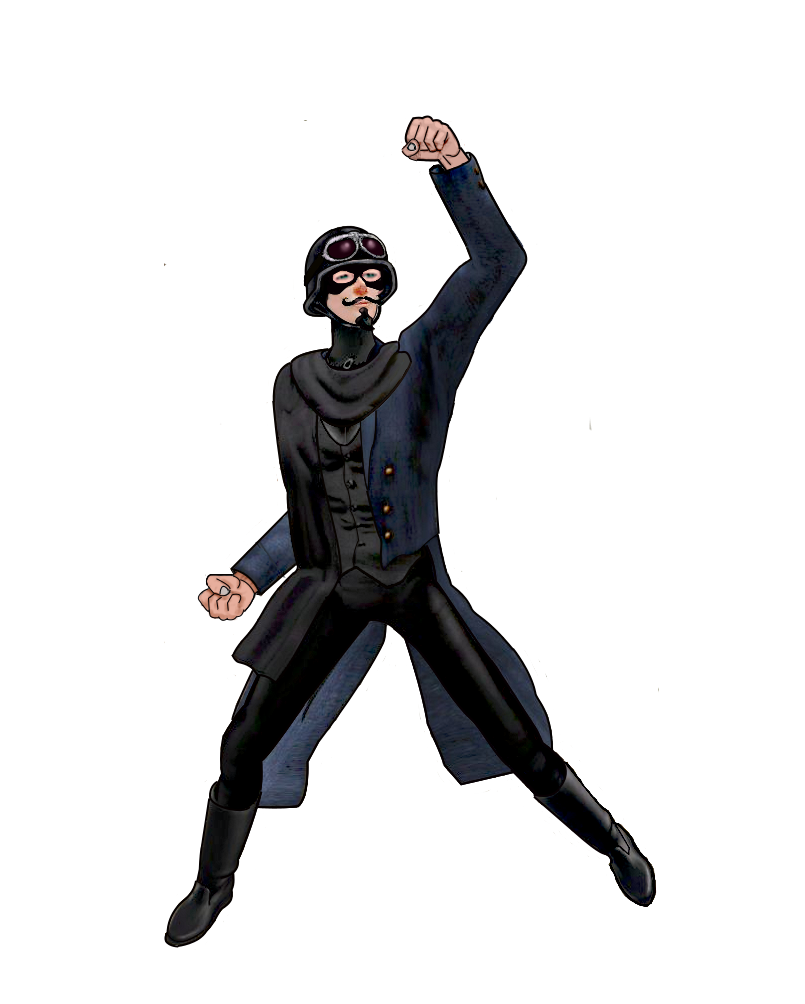 “Stop sniveling you scoundrel and put up your dukes, or I’ll be forced to subject you to further thrashing,” said the assailant, and though still obscured by shadow, his distinct voice and curious accent identified him at once.

“Emerson Lighthouse!” the figure stepped from the shadows, grinning most cordially as he reached out a hand to offer assistance.

“Of course,” said the Count, who glanced at the display case containing the Ravilan Crown Jewels. “It seems we have the same goal in mind, no?”

“Listen, I have no problem cutting you in for a small share of the profits,” said Emerson while continuing to study the mechanics of the alarm system. “My fence is excellent.”

“As is mine,” said the Count, whose smile had faded somewhat at the mention of the word small in connection with share of the profits. “In fact mine is expecting me for breakfast, perhaps your’s is not such an early riser?”

“The Squire’s waiting in the steammobile in front of the museum as we speak.” Emerson nodded his head toward the front of the building. “He’s going to run me over to see my guy as soon as we make our getaway.”

“You are always thinking, my friend, a real professional,” said the Count. “And I want to help you. Perhaps my man is closer, I wouldn’t want you to waste coal driving further than you need to. If you give me the jewels I could run in and at least have him appraise them for a counter offer before we meet your contact.”

“How close is your guy?” asked Emerson.

“Not far, nearby in fact,” the Count beamed. “You can trust me, my friend. Give me the jewels.”

“I would, but we have to acquire them first, and I’ve never seen a clockwork security system like that.” he pointed to the box. “If I didn’t know better I’d think it was wired with an explosive.”

“Indeed it has been wired with an explosive.” The unexpectedness of the woman’s voice made both men jump. She stepped from behind a pillar across the hall, a brown-haired masked-woman, wearing a blue showgirl costume and red cape. “There are actually three mechanisms within the casing of that box,” the woman strode forward with confidence, stopping at the side of the display containing the Ravilan treasure. “Two of the mechanisms must be stopped simultaneously while the other continues to operate unimpeded,” as the young lady spoke, she pulled a  long pin from her hair and bent it double. “Like this.” The woman then thrust the  hairpin down preventing two of the three gears from rotating. With a click the panel on the front of the display case opened, allowing access to the Ravilian Crown Jewels.

“That’s fantastic! You just saved us so much time. Allow me to introduce myself.  I am the Knight Crusader and this is the Blue Blood Avenger.”

“I know of you,” she said. “Were you both not involved in the New Year’s Day fiasco at city hall?”

“Our fame precedes us,” the Blue Blood Avenger bowed. “At your service—”

“I am the Cog Blocker.” The woman announced, hands on hips. “Now come, I need your help.”

“Of course,” Emerson replied, shrugging his shoulder and allowing the bag to slip to the floor. “What happens next?”

“Next…” the Cog Blocker spoke in a slow, distracted manner due to the fact she was so focused on reaching into the display for the Ravilan treasure, “…next, I steal the Crown Jewels and remind you both the only thing preventing an explosion from blowing you to itty-bitty bits is your fingers on those gears. Please be careful.” She smiled at the two dumbfounded men. “Cheerio.”

“Wait,” the Knight Crusader seemed caught between confusion and anger. “You’re robbing us and leaving us here to take the fall?”

“Sorry, boys, nothing personal but business is business; you understand. Toodle-oo!” The masked woman waved as she fled the scene, jewels tightly held to her side.

“Hell’s Bells!” The Blue Blood Avenger’s curse echoed throughout the empty halls of the museum, “Foiled on the very brink of success! Curse you, Cog Blocker!”